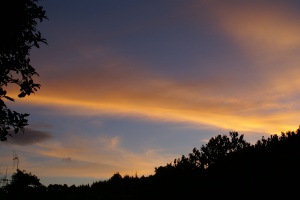 The smell of chemicals, the presence of chemtrails, aerosol material seen being sprayed from aircraft, distinctive wave patterns in clouds, man-made clouds, persistently cloudy skies without rain, plus the advent of strangely light rain, now seem to be the norm in Whangarei, while last year, they were virtually unknown to the region.  Yet in spite of this drastic change to the environment, the drought and seemingly obvious evidence of weather manipulation,  many still find it hard to believe that this form of secret warfare could be in play.   If it not on TV, then they don’t believe it could be happening.

Thankfully, it will now be more difficult for these Doubting Thomas’s to put their heads in the sand, as a test on rainwater collected in Whangarei in April, has proven that we do have chemtrail chemicals linked to drought-inducing weather modification technology right here in our skies.

On the 16th of April, shortly after making a short film with Jim Reece, which is at YouTube titled ‘Forecast – Toxic Rain Expected in Northland, NZ: Chemtrails & The Technology Of Death,’ rainwater was collected in Whangarei in order to establish if chemtrail chemicals were in the air – in particular, barium and aluminium, which have been linked to drought-inducing weather modification technology overseas.

Barium, which is an immune-system suppressant, is a soft silvery metallic alkaline earth metal and it should not be found in rainwater, period.  It is believed to being pumped into the atmosphere in aerosols sprayed from aircraft around the world, where it is being used for a variety of stealth warfare purposes in a silent war that is being waged against humanity.

A big clue regarding barium’s uses comes from Bernard Eastlund’s patent for  HAARP. HAARP is a transmitter which can be used for a variety of functions, including heating the ionosphere.  It has the ability to direct a steerable electromagnetic beam at the upper atmosphere and effect rainfall patterns in a particular region and notably, the patent calls for large clouds of barium to be released into the atmosphere.

As well as barium, there is strong evidence to show that the massive aerosol operations that are going on around the world, include the spraying of aluminium.  Disturbingly, this is being found to have a devastating impact on eco-systems.  In an area of Shasta County in California, where a lot of research has been conducted into the impact of these aerosols, it has been established that aluminium is altering the pH of the soil from acidic to neutral and causing the trees to die.  Thus, Whangarei rainwater was tested for the presence of aluminium also.

In addition, I opted to test for boron and arsenic, as these, amongst other toxins,  have been found in high levels in Australian rainwater where chemtrailing is occurring.

R J Hill Laboratories Ltd did the testing.  It is accredited by International Accreditation New Zealand and the prices are reasonable. For example, it was only about $15  (including GST) to test for aluminium.

On the advice of Carole Rodgers-Carroll of  Hill Laboratories, I acquired a Pump water bottle, which holds 750 ml, to send the sample to the lab in, as she said these bottles are relatively free of contaminants.

Collecting 750ml rainwater was not a straightforward task, because rainfall has been uncharacteristically patchy this year.   I started collecting rain on April the 16th – a day during which it only rained a little.  After it appeared to have finished raining that day, and I had tipped the water into the bottle,  I noticed the rainwater had bright-white particles floating in it, of the same brightness seen in aerosols seen being sprayed in the region.

Rain was collected on three other days and the bottled filled on April the 27th – a day during which it rained quite heavily for some time.

I secured the top of the bottle with tape and sent it via track and trace mail to Hill’s lab on the 27th.   When it arrived on the 30th of April, I phoned the lab and asked for confirmation that the tape was secure and that the contents was as I had seen it.  Carole Rodgers-Carroll did so and has  stated on the report that tape was applied and intact to the lid of the container when it arrived.

The results, which were reported on May the 5th, were as follows:

As you can see, barium was present, so too aluminium and boron.  As mentioned, barium should not be in rainwater at all and  it mentions on the WHO website that: “Boron is not present in the atmosphere at significant levels (Sprague, 1972). Because borates exhibit low volatility, boron would not be expected to be present as a vapour in the atmosphere to any significant degree.”

In light of the fact that aluminium is being found around the world in association with these aerosol operations, many of which have been witnessed in this area, it is fair to assume that at least a significant proportion of the aluminium that was found, originated from aerosols.

To conclude, this provides yet more evidence to show that weather modification technology is being used in this region. Barium and aluminium are hallmarks of chemtrail operations worldwide.

I encourage others to get the rainwater in their areas tested. The more evidence there is to show a criminal operation is taking place without our consent, the easier it will be to draw the public’s attention to it.

Committed to awakening those still asleep. Please keep an open mind and do your own research. WebofEvidence on YouTube: https://www.youtube.com/channel/UCyTh2WC7w_8GYD6ZecXUQMQ Clare on Bitchute: https://www.bitchute.com/channel/1z2iaeXTln25/
View all posts by Clare Swinney →
This entry was posted in Aluminium, Barium, HAARP, Weather Modification, Whangarei and tagged HAARP. Bookmark the permalink.