Here is a glaring contradiction worth contemplating. US Secretary of State and Skull and Bones member, John Kerry strongly condemned Syria’s supposed use of chemical weapons, saying the attack should “shock the conscience of the world,” and that there must be accountability for those using the world’s most heinous weapons.   This has left some wondering why the use of chemtrails/geoengineering, which we can see being used with our own eyes, has not been similarly condemned.  After all it should be, given its scale and the horrendous damage it is causing to the environment and to human health.

The US Air Force’s use of toxic aerosols within the US was exposed by USAF Environmental Specialist, Kristen Meghan and she made it apparent that they have something big to hide.

On October 2, 2001, Congressman Dennis Kucinich of Ohio, introduced H. R. 2977 during the 1st Session of the 107th Congress of the United States and in the Bill, chemtrails were referred to as an “exotic weapons system“, the definition of which was as follows: (C) The term `exotic weapons systems’ includes weapons designed to damage space or natural ecosystems (such as the ionosphere and upper atmosphere) or climate, weather, and tectonic systems with the purpose of inducing damage or destruction upon a target population or region on earth or in space.

The term chemtrails was later removed from the Bill, although the record of the first version remains as an indisputable testament to the function of chemtrails.

John Kerry’s comments about the “obscene” use of chemical weapons in Syria provide us with a prime example of the hypocrisy of the ruling powers. 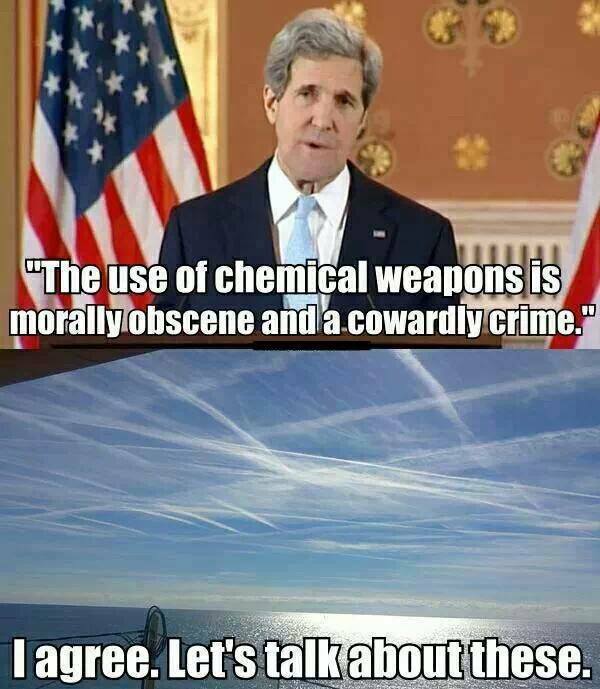 Interested in what is genuinely going on, not in the disinformation promoted as "truth" by the corrupt mainstream media. Please keep an open mind and do your own research. M.Sc. (Hons) from Auckland University. If you came to this site via the 'Silly Beliefs' disinformation website, please read my response to their article at the link: https://chemtrailsnorthnz.wordpress.com/2012/10/20/sillybeliefs-coms-lies-about-chemtrails-geo-engineering-exposed/
View all posts by Clare Swinney →
This entry was posted in Government. Bookmark the permalink.