Aerosol Chemicals Detected In Rainwater Collected In Arapuni In Mid-March

The latest rainwater analysis, the tenth for New Zealand on this website, was conducted by the highly regarded R J Hill Laboratories of Hamilton. The sample was collected by James [name withheld] of Arapuni, which is in the Waikato region of the North Island of New Zealand, between March the 15th-16th, 2014, when Cyclone Lusi moved over the country.

The results confirm the presence of aluminium, barium and strontium in our rainwater in 2014, which is to be expected in light of all the aerosol material and evidence of weather modification technology being seen, both in the satellite imagery and from ground observations.

Similary, an October 2012 hair analysis from a boy in Whangarei who was drinking tank water,   not the mains supply, revealed his hair had aluminium at a concentration of 26µg/g to Barium of 2.4µg/g, an aluminium concentration 10.83 times higher than that of the barium concentration.

Finally, a cautionary note.  Do not be fooled by disinformation websites such as Metabunk, which deceive the unwitting public into thinking all is normal.  It isn’t normal, natural or OK for aluminium, barium and strontium to be present in the rainwater like this.  As mentioned before on this website, we have found bright-white particles floating in the rainwater on a number of occasions, so what we are finding is an industrial form of these chemicals, not a natural one.   Our findings are supported by those of the CarnicomInstitute’s and what the brave whistleblower, Kristen Meghan, a former Air Force Bio-Environmental Engineer has reported.   She said she witnessed the importation of canisters of powdered toxic metals including aluminum and barium onto U.S. Air Force bases.  Refer: Kristen Meghan, Info Wars Interview. 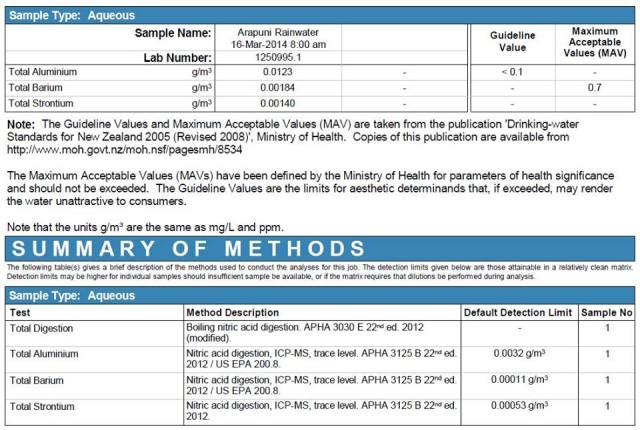 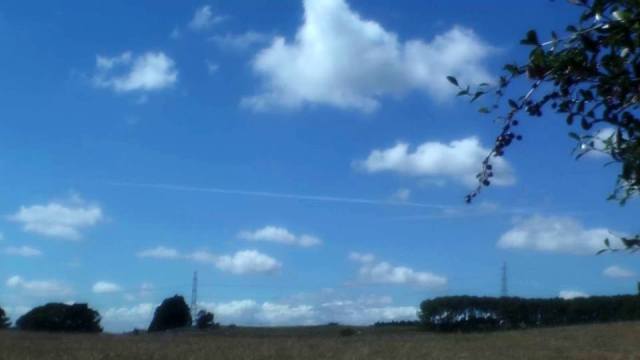 Aerosol trail. Taken from Arapuni on March 19, 2014. Writes James: “It is one of the few fresh looking trails I have seen here. We usually get them from the West coast, where the prevailing wind comes from, and the passenger jets travel many times a day. Most trails are dispersing or dispersed into bizarre shapes or hazy masses by the time they drift in to here.”

There is an historical interest and experimentation documented regarding the use of barium in ionization and plasma physics.

Jeanne Manning, who co-authored Angels Don’t Play This HAARP – Advances in Tesla Technology with Dr Nick Begich, wrote in A New Physics for a New Energy Source: [John] Hutchison captured the same pulsing, rhythmic energy by using crystals of barium titanate, a material that can capture the pulses of certain electromagnetic frequencies in the way that a radio can pick up certain radio frequencies. When the crystal pulses, or resonates, it produces electric power.

Military Said Behind Up To Four Different Chemtrail Programs

Interested in what is genuinely going on, not in the disinformation promoted as "truth" by the corrupt mainstream media. Please keep an open mind and do your own research. M.Sc. (Hons) from Auckland University.
View all posts by Clare Swinney →
This entry was posted in Activism, Aluminium, Barium and tagged aluminium, Barium, kristen meghan, strontium. Bookmark the permalink.