Oval Hole in Cloud Over Warragul, Australia on November 3rd Evidence of Weather Engineering In Play

The photos below of the oval hole were taken at about 1pm today by Eileen Harrison of Warragul, Victoria, Australia, a town 104 kilometres east-southeast of Melbourne.

She said that the weather was sunny and clear, then she noticed  specks of clouds forming, and subsequently this large oval hole in thin cloud appeared, which expanded as time went on, as her photos show.   She says she has never seen anything like it before.

Well Eileen, we know you won’t be told the truth by your mainstream media,  as they are controlled and covering up what is really going on, as they are in New Zealand, and just about everywhere else around the globe.   For example, many witnessed the same  phenomenon here in Northland, New Zealand in late-March  this year and a MetService weatherman, who was cited as an “expert,” falsely claimed it was caused by passing aircraft, [1].  However, he didn’t account for why these holes had only just started being seen here and why they are not being seen primarily on major air traffic routes, which they are not.

In reality, they are not caused by aircraft. They are caused by the use of weather modification technology, that evidence shows is being used to create extremes such as droughts and floods, to suit a political agenda, amongst a variety of other potential agendas.

According to award-winning TV weatherman, Scott Stevens who runs the informative website Weatherwars.Info, the holes are caused by a flood of negative ions delivered by HAARP or similar technologies, which leads to the weeping cirrus cloud in the centre of the hole.  The flood of negative ions releases static bonds that are holding the clouds together.  The hydrogen and oxygen bonds holding the water molecules together are broken and with the resulting release, moisture falls out of the cloud above.

To see more examples of these holes, visit: http://weatherwars.info/holes-part-2/ 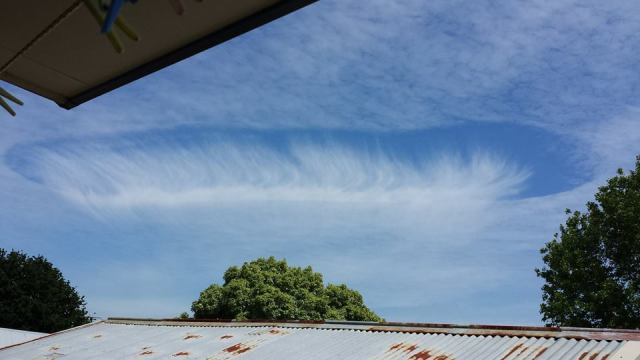 WATCH: Why In The World Are They Spraying?

Interested in what is genuinely going on, not in the disinformation promoted as "truth" by the corrupt mainstream media. Please keep an open mind and do your own research. M.Sc. (Hons) from Auckland University. If you came to this site via the 'Silly Beliefs' disinformation website, please read my response to their article at the link: https://chemtrailsnorthnz.wordpress.com/2012/10/20/sillybeliefs-coms-lies-about-chemtrails-geo-engineering-exposed/
View all posts by Clare Swinney →
This entry was posted in Global Warming Hoax, HAARP and tagged Australia. Bookmark the permalink.

3 Responses to Oval Hole in Cloud Over Warragul, Australia on November 3rd Evidence of Weather Engineering In Play