Rain has been forecast by MetService for Whangarei, Northland a number of times in the last week, including for November the 24th and November the 26th and apart from an exceptionally light sprinkle or two, it has been as dry as a bone.   I have had to start watering my garden in places today where grass is slightly browning and plants wizening.

While rain clouds can be seen approaching over the sea to the west of Northland in satellite imagery, by the time they reach land here, they appear to be broken up and unable to produce rain.

Further to my last post regarding evidence of weather modification technology evident in cloud cover in satellite imagery of November the 24th, below is an image from the satellite named Aqua for November the 25th, 2014, showing cloud cover over Northland with a series of straight-line cuts in it.  Is this one of the methods being used to stop it from raining?  Scott Stevens of Weatherwars.Info shares some of his knowledge in regard to what can be picked up in satellite images here.

Also, notice the aerosol trails that are visible through the gap in the cloud on the bottom left-hand side of the image.  On the topic of which David Hardy of Whangarei advised at about 8pm on November 25th to look up as there were six chemtrails parallel to each other in a north-south direction.    Aerosols trails are being sprayed at night, also. 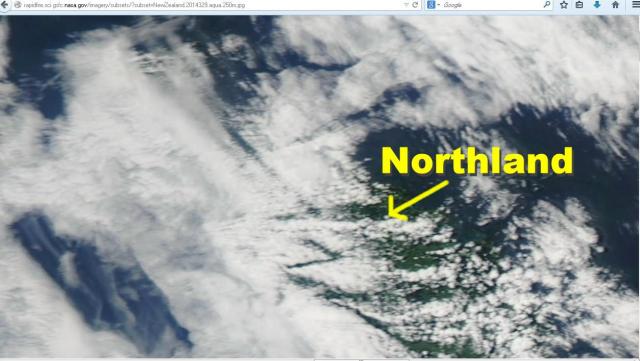 Above: Image from Aqua for November the 25th, 2014, showing cloud cover over Northland.  To see the full image go here: http://rapidfire.sci.gsfc.nasa.gov/imagery/subsets/?subset=NewZealand.2014329.aqua.250m.jpg

Interested in what is genuinely going on, not in the disinformation promoted as "truth" by the corrupt mainstream media. Please keep an open mind and do your own research. M.Sc. (Hons) from Auckland University. If you came to this site via the 'Silly Beliefs' disinformation website, please read my response to their article at the link: https://chemtrailsnorthnz.wordpress.com/2012/10/20/sillybeliefs-coms-lies-about-chemtrails-geo-engineering-exposed/
View all posts by Clare Swinney →
This entry was posted in Weather Modification. Bookmark the permalink.

6 Responses to Straight-Line Cuts in Cloud Cover Over Northland On Nov 25 Evidence of Drought Induction Technique?