More Letters In ‘The Tribune’ Raising Awareness of The Chemtrail Issue

In our country the lie has become not just a moral category but a pillar of the State.         – Alexander Solzhenitsyn, Soviet novelist.

It is not only important, but essential for anti-chemtrails/anti-weather modification activists to find a variety of effective ways to inform the public about chemtrails and weather modification crimes when the mainstream media, which is supposed to inform, is engaged in distorting and suppressing the truth.

One way to do this, which usually requires little effort and zero expense, is by writing punchy letters and emailing high-quality photos to the editors of newspapers and magazines.

Thank-you to a Sharon Turner of Wanganui, a member of Chemtrails over NZ,  for doing just this last week.  Her letter, as well as photograph, appeared at the top of the Letters To The Editor section in this week’s edition of  The Tribune, Palmerston North’s free community newspaper, which is delivered to over 40,000 addresses. (See below).

Fortunately, I too had a letter published in The Tribune last week and like Sharon, my letter addressed the matter of the fallacious comments made by Michael Campbell,  ‘Team Leader Safety Data Management’ at the Civil Aviation Authority of New Zealand, (CAA).

His letter to The Tribune (January 28th) which incorrectly claimed gardening columnist, Wally Richards had written “fanciful drivel,” provided a ripe opportunity for members of the public to write in with more information about chemtrails and weather engineering.

Campbell, who is a known disinformation agent among the New Zealand truth community,  has written comments on Northland NZ Chemtrails Watch for over two years, and in that time he has neither exhibited an appropriate concern nor acknowledged credible evidence regarding how damaging aerosols can be to the environment.

It came as no surprise to read in his reply of February 2nd, 2015 to an email I sent to his CAA email address: “… it takes little time at all to debunk your nonsense”  demonstrating that he regards it as his duty to ‘debunk.’

Today I learned a new term, “Shillidiocy,” which is applied to those who are ready and willing to sell out humanity.   I will not be that scathing, as I do believe we owe these folk a debt of gratitude, for not only can we hone our skills by arguing with them, but we can also take the battle to a wider audience, and educate members of the public with previously unpublished information in the process. 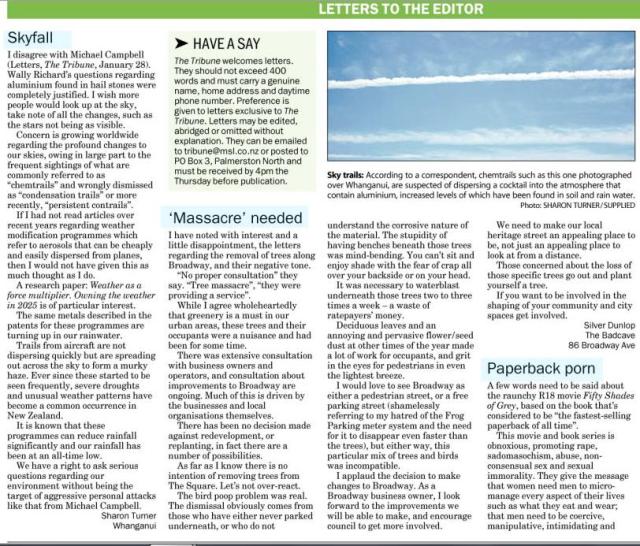 Letter published in February 11th, 2015 edition of The Tribune.

The digital edition of the paper is here: http://thetribune.realviewdigital.com/#folio=8

Interested in what is genuinely going on, not in the disinformation promoted as "truth" by the corrupt mainstream media. Please keep an open mind and do your own research. M.Sc. (Hons) from Auckland University. If you came to this site via the 'Silly Beliefs' disinformation website, please read my response to their article at the link: https://chemtrailsnorthnz.wordpress.com/2012/10/20/sillybeliefs-coms-lies-about-chemtrails-geo-engineering-exposed/
View all posts by Clare Swinney →
This entry was posted in Activism. Bookmark the permalink.