Fiddling with the data

By David Rothbard of CFACT 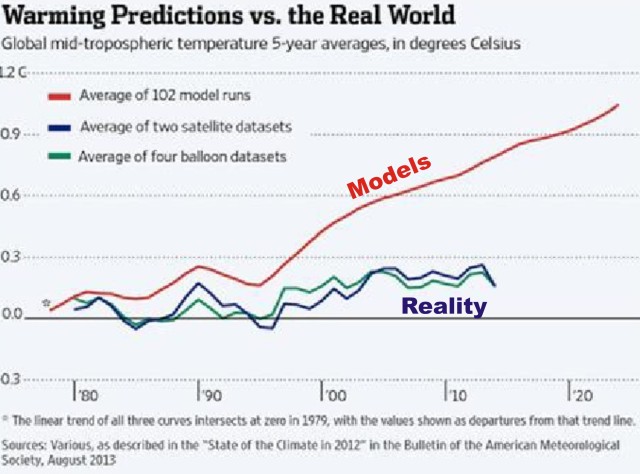 What could be more embarrassing for those who say climate science is “settled” than for scientific observations to reveal their dire predictions are not coming true?

Every day more scientific data emerge that poke cavernous holes into the warming narrative, and maybe that’s why some in the warmist camp are willing to tinker with the evidence.

Disturbingly, NOAA recently made a shoddy attempt to conjure up a 21st century “warming trend” by ignoring satellite data (the best available), and adjusting measurements from research buoys upward to match data from shipping – which is the least reliable.

Fortunately they didn’t get away with it.

Climatologists Pat Michaels, Richard Lindzen, and Chip Knappenberger were onto them. They pointed out that “the NOAA team adjusted sea-surface temperature (SST) data from buoys upward by 0.12º C, to make them ‘homogenous’ with lengthier records from engine intake systems in ships. However, engine intake data are ‘clearly contaminated by heat conduction’ from the ships, and the data were never intended for scientific use – whereas the global buoy network was designed for environmental monitoring.”

So why not adjust the ship data downward, to “homogenize” them with buoy data, and account for the contamination? Perhaps because, as Georgia Tech climatologist Judith Curry observed, this latest NOAA analysis “will be regarded as politically useful for the Obama Administration.”

Global warming pressure groups and the White House hope to keep our eyes off inconvenient data, either by manipulating it or distracting us with scare stories in the media, until after President Obama signs our energy future away at the UN climate conference in Paris.

Unfortunately for them, facts are facts.

The Earth is actually cooler than climate models project and the weather is normal. Extreme weather, as the data show, has been unusually tame.

Energy expert Tom Tamarkin and CFACT senior policy advisor Paul Driessen have also done their part to expose some of the propaganda tricks being played by Green advocates to lock the world’s nations into a UN climate agreement while President Obama is still in office.

In their recent article, Tamarkin and Driessen remind us that, “no category 3-5 hurricane has hit the United States for a record 9-1/2 years. Tornadoes, droughts, polar bears, polar ice, sea levels and wildfires are all in line with (or improvements on) historic patterns and trends. The Sahel is green again, thanks to that extra CO2. And the newly invented disasters they want to attribute to fossil fuel-driven climate change – allergies, asthma, ISIS and Boko Haram – don’t even pass the laugh test.”

Of course, the very notion of “settled” science is a direct contradiction of the scientific method.

If the data disprove a theory, the theory must change.

Shame on those who are trying to bend the rules.

Interested in what is genuinely going on, not in the disinformation promoted as "truth" by the corrupt mainstream media. Please keep an open mind and do your own research. M.Sc. (Hons) from Auckland University. If you came to this site via the 'Silly Beliefs' disinformation website, please read my response to their article at the link: https://chemtrailsnorthnz.wordpress.com/2012/10/20/sillybeliefs-coms-lies-about-chemtrails-geo-engineering-exposed/
View all posts by Clare Swinney →
This entry was posted in Global Warming Hoax. Bookmark the permalink.

3 Responses to Fiddling with the data