Please Send Photos Of Aerosols To The Ministry for The Environment 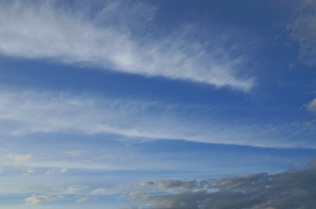 Researcher Malcolm Scott would like you to send your photos of aerosol trails, taken in New Zealand, to the Ministry for the Environment (MFE) at: info@mfe.govt.nz.
He offers: “In early November I sent an Official Information Act (OIA) request to Vicky Robertson, who is CEO and Secretary for the Environment, asking about aerosol forcing operations in Aotearoa.  The reply I received from the Director for Climate Change stated that the MFE was “unaware of any aerosol forcing operations in NZ.”  [See post immediately below].  I then submitted a second OIA request asking about reported sightings of aerosol trails by the public, this time I received a phone call from the Manager for Climate Change Analysis who told me that MFE receive about one OIA request a month concerning aerosol forcing, but that she was not aware of any reports received informing the MFE about sightings of aerosol trails. Thus, I told her I would see if I could arrange for her to receive some of these: Would YOU be willing to send some of your photos to her?  If so, please e-mail: info@mfe.govt.nz
Subject line: Attention – Manager for Climate Change Analysis
Attach: Several photos, ideally one with a landmark to verify location
Include: Date and location of photos
ASK: For MFE to investigate who is responsible for these aerosol trails
ASK: For MFE to inform you of the outcome of their investigations

I’d like to hear how you get on – message me, or post details to this group.
Thanks for your help with this.”

Interested in what is genuinely going on, not in the disinformation promoted as "truth" by the corrupt mainstream media. Please keep an open mind and do your own research. M.Sc. (Hons) from Auckland University. If you came to this site via the 'Silly Beliefs' disinformation website, please read my response to their article at the link: https://chemtrailsnorthnz.wordpress.com/2012/10/20/sillybeliefs-coms-lies-about-chemtrails-geo-engineering-exposed/
View all posts by Clare Swinney →
This entry was posted in Uncategorized. Bookmark the permalink.