Posted on January 2, 2016 by Clare Swinney
January the 1st, 2016,  By Nigel Gray
As a Painting Trade Contractor I have spent several years checking the weather reports, almost daily, on a need-to-know basis.   A front of rain coming over can lead to financial losses, a damaged job and angry clients if I am unable to predict the weather correctly.
Consequently, I have taken more than a casual interest in observing what is predicted by MetService and what occurs

subsequently,  or not, as the case may be.
If I’d had more time and interest in proving this absolutely and conclusively, I would have documented everything I have witnessed over the last several years.   I didn’t do this however, so I will likely be the target of so-called “experts” who are presumed to have more “knowledge” than I, accusing me of being a “nutter” or “a conspiracy theorist,” because they are qualified to “know better.”     Ha!
It is interesting that they feel so compelled to throw insults at someone who simply suggests that there is evidence which shows that reality might differ to that portrayed by the “powers-that-be”.    I will leave you to decide which camp you are in.
So, what have I witnessed?  OK, well to explain that, allow me to relate what happened on January the 1st, 2016, as a rain front moved over the North Island –  one that was visible on the MetService’s Rain Radar page,  that I saw evidence of being created or ‘pulled in’ over two days.

I will leave you to do research into how the weather can be manipulated using Nexrad, GWEN towers and HAARP transmitters,  all of these terms can be found on the internet along with vast amounts of information on each one.    I am going to keep this about my observations of what you need to know and this is based upon my experience.   Science is, after all, facts gathered by observation and experience.

Throughout New Zealand there are antennae placed in various locations.   Whether they are owned by the culprits involved in manipulating the weather or simply used as platforms to bounce off,  I do not know, but they are being used systematically to superheat the upper atmosphere, causing air to rise and pull cold air into that space by creating a vacuum below.
So essentially what happens is that there are high-powered microwave pulses emitted from these antennae in a specific direction.  This happens at about 7:25am usually, daily and at other times during the day, at a frequency which may be dependent on how important it is for the “powers-that be” to create bad weather in a particular area.
I have often observed these pulses occurring in twos, emitted from two antennae that are in proximity to each other with the pulses being emitted in the same direction.  First one antenna pulses, then approximately one second later, the second antenna pulses in parallel.
For example, if perpetrators of weather modification aim to pull a cold front down from the north, then the pulses would be directed in a southwesterly direction.   I observed this occurring yesterday, and hence today, January the 1st, 2016, there is a band of rain coming down from the north upon New Zealand.
Similarly, if  the aim is to bring in some cold front that is hanging over the Tasman, then they choose a different set of antennae, one usually located around the  Gisborne/Napier area, and send pulses in an easterly direction.
Below is an example of two pulses in parallel evident in an image from the MetService website for the 2nd of November, 2015. 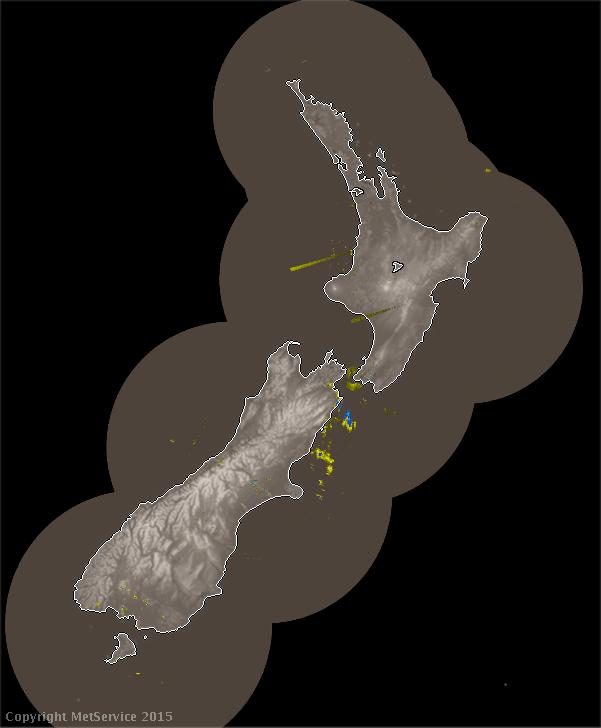 Above: This third image, dated 2014, shows one pulse but, as you will notice, behind the pulse is a band of rain following exactly in the direction of the pulse.

So, coincidence? No. I could show you numerous images, all taken directly from the MetService’s Rain Radar pages that show much the same thing.

A couple of years ago I contacted MetService via their Facebook.com page and asked them to explain these anomalies, (the pulses).  Not only did they have no explanation for the pulses, but tellingly, they ridiculed me for my observations.

This is not surprising given that MetService is a State-owned enterprise,  and as a State-owned enterprise,  it has two shareholding ministers – the Minister for State Owned Enterprises and the Minister of Finances.    Could it be that they have sworn a confidentiality agreement, so are unable to disclose that weather modification is taking place?   Or are they just ignorant and uncaring?   It must be one or the other.   Of course, they would be critical of anyone who questioned their veracity.

There are other anomalies evident in Rain Radar images, also.   Invariably when rain does show up there are “blank spots,” usually in the shape of a circle, rectangle or triangle, where the rain does not appear to penetrate, at least according to the radar results.   Could these be explained by the use of EMF waves that are emitted either as sine waves, sawtooth waves or other? Could these be areas that are already “hot” and therefore unable to be penetrated by the rain?   I can’t answer these questions, sorry.    What I do know is that these results have been invariable over the last ten years when I started taking notes on it.
What I do know is that, invariably, prior to major rain fronts, these pulses occur in the direction that the front will follow. That these pulses emanate from antennae located in places such as Gisborne, Taranaki, Taupo, Napier, Blenheim and Auckland.

It seems feasible that the New Zealand Government may be hiring a private company or companies to modify the weather to protect farm production, however there is always the possibility that the reasons are more nefarious, particularly given the regularity of severe droughts in New Zealand since early-2010.
If they have this technology available to them,  one has to wonder why it has not been used to break dry spells before they cause significant economic damage, such as that caused by the North Island drought in 2013,  described as the worst in history?  Again, we can only guess.   It is clear that if the Government is “in” on this, then they are not informing us, and if they are not aware of it, then it leaves me wondering if our Government is sadly lacking any credible security when it comes to protecting our country from the threat of this sort of technology.
Nigel Gray is a New Zealand-born and bred international lecturer on the Human Mind and Detoxification Technology, and a Painting Contractor.  He has lived in the United States and Russia, where he instituted a detoxification program that now spans the entire CIS, (Commonwealth of Independent States).
Related:

Committed to awakening those still asleep. Please keep an open mind and do your own research. WebofEvidence on YouTube: https://www.youtube.com/channel/UCyTh2WC7w_8GYD6ZecXUQMQ Clare on Bitchute: https://www.bitchute.com/channel/1z2iaeXTln25/
View all posts by Clare Swinney →
This entry was posted in Technology, Weather Modification. Bookmark the permalink.