An internal memorandum was sent in error by an employee at the Ministry for the Environment to a post-graduate researcher named Malcolm Scott of Canterbury.  Mr Scott, who is investigating issues related to atmospheric aerosol operations in New Zealand, did not realize the significance of the 6-paged document until someone called him and asked him to destroy it. 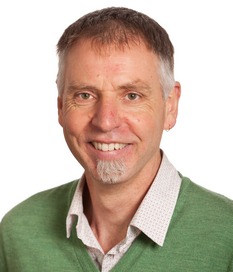 On March the 11th, Mr Scott got a phone call  from a member of the Climate Directorate staff informing him that a 6-page memo had been sent in error and they wanted it destroyed.  Malcolm asked for the request in writing and lo and behold, later that afternoon this arrived via email:

Can you please confirm by return that you have destroyed the 6 page internal memorandum that was inadvertently released to you under the Official information (OIA).  A mistake at our end and I apologise for that.

The request came as a surprise, as he had assumed the internal memo was part of the material sent in response to his questions, which included the letter posted below and dated February the 29th, 2016.   However, on examining the internal memo in more detail, he understood why the Ministry for the Environment did not want him to keep it.

Titled ‘Malcolm Scott 16-D-00142′  and dated February the 24th, 2016, the internal memo is written in relation to questions Mr Scott had submitted to the Ministry under the Official Information Act, (OIA) on February the 8th, 2016, regarding atmospheric aerosol operations.

While he is unable to allow it to be published yet, it has been cited for this article.

Under the heading ‘Risks’ the memo mentions that their response to Mr Scott is considered to be “low risk”  as: “There is not much material in scope and what is released is only a list of dates.”

It also refers to the perceived risk in relation to the media, indicating that keeping atmospheric aerosol operations out of the public’s consciousness is important to the government.  It states: “Correspondents often make multiple requests, but all enquiries have proved to be low risk, attracting little if any public or media attention.” 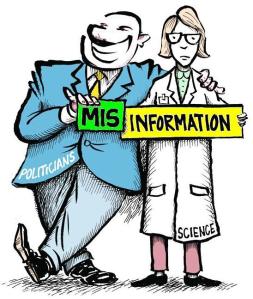 Mr Scott offers: “There are repeated references to risk assessment of release of information, and it is apparent that staff are actively monitoring public and media attention to reports of aerosol forcing operations.  This seems unusual given that Ministry officials have repeatedly denied any awareness of aerosol forcing operations and repeatedly claimed that there’s no evidence of these operations in New Zealand.”

Needless to state the internal memo provides important insights into the Ministry for the Environment’s policies related to OIA requests regarding aerosols operations.  It strongly suggests that there is a directive to deny that atmospheric aerosol operations are taking place, thereby indicating that those in power do not respect the public’s right to know the facts when the Official Information Act is applied.

When Mr Scott received the request to destroy the internal memo, we consulted with a number of people to find out what his options were, as he believes the public has a right to see it.   Investigative journalist and government watchdog, Nicky Hagar, who wrote Secret Power and Dirty Politics advised:  “Malcolm has no obligation at all to destroy that memo. They slipped up and sent an internal document. They addressed it to him and sent it. It’s their problem. He would probably be entitled to be sent the same document if he applied for it under the Privacy Act anyway…”

In a letter dated April the 5th, Mr Scott requested the memo under the Privacy Act  on the basis that it is related to his research inquiries and bears significant reference to information about himself.     “I also advised Ministry officials and staff that they have a responsibility to act in the public good, to uphold existing environmental legislation and work with other governmental authorities to ensure legislation which protects the environment is enforced,” he offered.  He is waiting for their reply.

Mr Scott, who is very concerned about this issue, said he believes the time is overdue for the Ministry for the Environment to step up to their responsibilities in relation to the aerosol spraying operations underway in New Zealand and demonstrate the environmental stewardship and leadership the public expects.

Democracy is being undermined as access to information is being denied.  Reform of the Ministry’s policies is imperative in order to protect the environment and the health of humans and other species.  This is far more important than maintaining secrecy.   The facts regarding atmospheric aerosol operations must be released.

Below: A slideshow showing some evidence of atmospheric aerosol operations both here in New Zealand and overseas.

Below: Letter from the Ministry for the Environment, answering Malcolm Scott’s questions in a typically guarded manner. 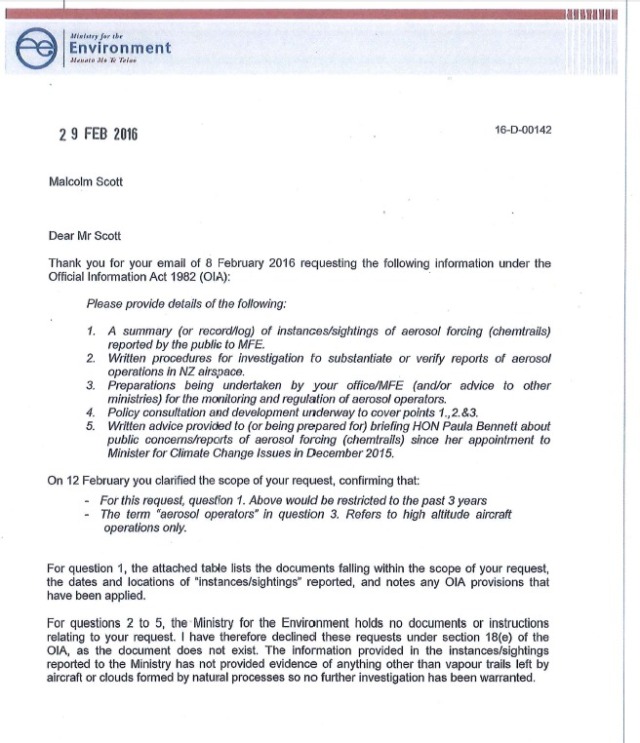 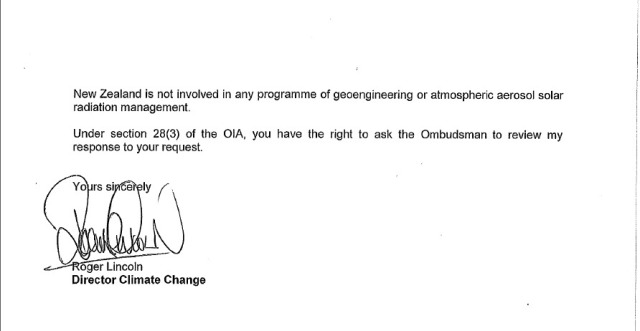 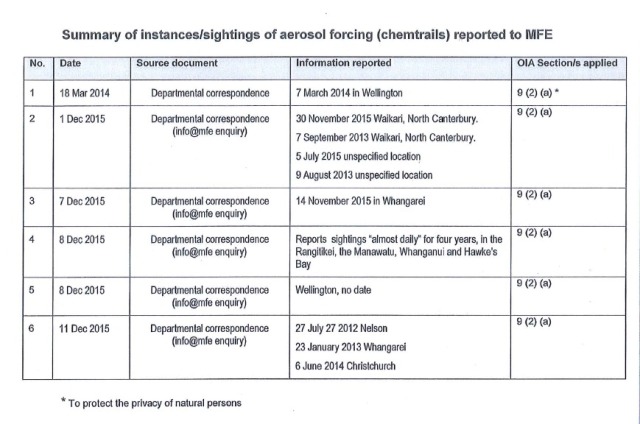 Related: Pdf version of letter dated Feb 29th, 2016, sent in reply to Malcolm Scott in reply to his questions submitted under the OIA.

Pdf version of the letter to the Ministry for the Environment from Mr Scott dated April the 5th, 2016

13. Why In The World Are They Spraying?

14. Evidence of Weather Modification Technology In Use In Canterbury Shown on TVNZ One Weather 29 July, 2013

16. Neurologist Warms Aluminum in Chemtrails is a Dangerous Neurotoxin

20. As weatherman, Scott Stevens, who has examined the use of chemtrails using time-lapse equipment has noted however, SRM is a very poor explanation for the chemtrail program, as there is something far deeper, more complex and important than simply “making clouds to keep out sunshine” from an already cooling planet going on.

Interested in what is genuinely going on, not in the disinformation promoted as "truth" by the corrupt mainstream media. Please keep an open mind and do your own research. M.Sc. (Hons) from Auckland University.
View all posts by Clare Swinney →
This entry was posted in Activism, Government, Politics and tagged aerosol operations, Malcolm Scott, Ministry For The Environment. Bookmark the permalink.