Next to Anzac Park, an aerosol trail lingers above E-Can’s Air Monitoring System on the south side of Timaru.

Around New Zealand aerosol trails are being witnessed frequently.  Thankfully, more and more people are waking up, looking up and best thing is that they are also speaking up!

I live in Timaru, where recently it was reported that the air pollution was the worst in Oceania according to the latest urban air quality database and it exceeds World Health Organisation (WHO) safety levels.

In regard to this I want to make a few points.  The governmental organization, Environment Canterbury, (E-Can), has two air monitoring stations in the Timaru area. One can be found at Anzac Park, which is pictured above, while the other is at Washdyke in Timaru’s industrial area and is pictured below. 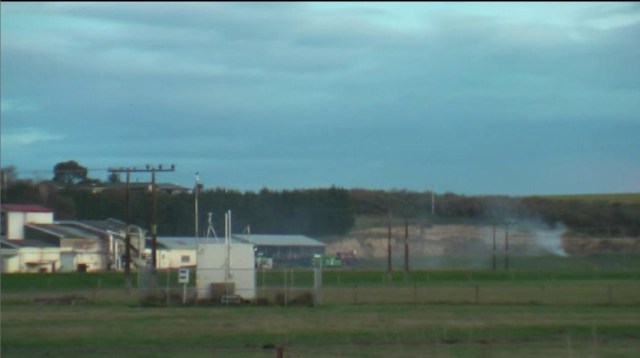 Take a look at the photos of each station.   Both show air pollutants lingering in the atmosphere, but not from the primary suspect for pollutants, wood burners.

In the photo showing the Washdyke station there appears to be a fire smoldering nearby and the smoke is drifting towards the monitoring station.  While at the Anzac Park station  a “chemtrail” aka an aerosol trail is evident.  These trails are seen regularly here, but strangely never referred to by E-Can.

That is not a mere vapour trail.  I started filming this trail from out of town and followed it into town. When I first filmed it, it was relatively thin, but as it traveled, it expanded and developed feathery-looking edges as shown.

Also,  of note, I positioned a sterile container for rain collection about 150 meters from the Washdyke monitoring station in 2015 and the results revealed the heavy metals aluminium, barium and strontium present.  These heavy metals are found where aerosol spraying takes place.  If they are in the rain, they are in the air that we breathe.

One major problem with the particulates being pumped in to the air that we breathe is that people’s health suffers, as researcher Clifford Carnicom’s work has shown.   Myself, I have been an asthmatic all my life and often seem to be reaching for my puffer, especially after witnessing and filming aerosol trails.
Not only do I find that my own breathing problems have risen, but these have in people I know in Australia and in New Zealand.  This is anecdotal, but there appear to be more and more people suffering from respiratory problems and some of them, in their 30`s to 40`s, are now finding themselves on asthma puffers.

I also have noticed that more people are suffering from eye complaints. One friend went to a doctor with eye problems and the doctor told him his tear ducts were dry.  Myself, I have been experiencing a very similar problem.  Now when you see the trails being sprayed and know that some components may act as a desiccant, is it any wonder our eyes are dry?

Interested in what is genuinely going on, not in the disinformation promoted as "truth" by the corrupt mainstream media. Please keep an open mind and do your own research. M.Sc. (Hons) from Auckland University. If you came to this site via the 'Silly Beliefs' disinformation website, please read my response to their article at the link: https://chemtrailsnorthnz.wordpress.com/2012/10/20/sillybeliefs-coms-lies-about-chemtrails-geo-engineering-exposed/
View all posts by Clare Swinney →
This entry was posted in Aluminium, Barium, Health Effects, Physical symptoms, Poisoning Environment, Smog. Bookmark the permalink.