C Fact on 23/9/16    Climate campaigners love to stoke fears about ice.  They do this to distract us from the fact that their climate models continue to project warmer temperatures than real-world observations record. 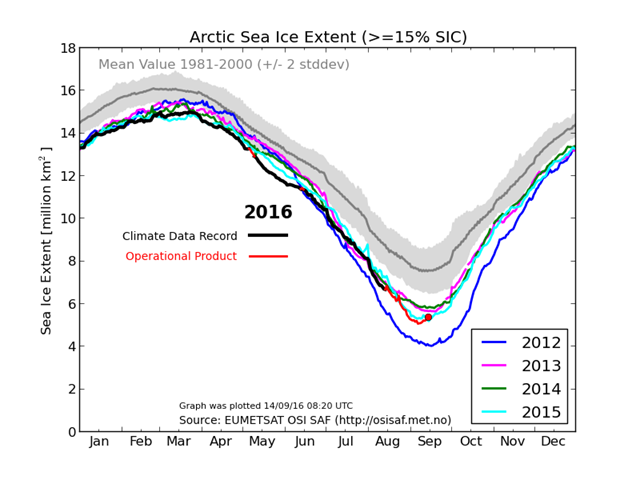 “Arctic sea ice extent for 2016 is up nearly 25 percent over 2012 levels as polar temperatures continue to drop. The information comes from satellite imagery provided by the Danish Meteorological Institute (DMI) and the National Snow and Ice Data Center (NSIDC), which has been tracking Arctic ice extent since satellite measurements began in 1979.”

On the other end of the Earth, Antarctic ice continues to expand.  This is very inconvenient for the the warming narrative, as the sea level scare campaign is based on projections of massive melting of Antarctic land ice that is simply not occurring.  Land ice impacts sea levels.  Sea ice not so much.

We’re just back from Ca

nada where Friday night’s showing of Climate Hustle was standing room only.   Marc Morano, the star of Climate Hustle, was with me in Edmonton, Alberta, introducing the film and answering questions.

Marc was tickled to learn that Washington Post cartoonist Tom Toles and Michael Mann (of hockey stick and Climategate fame) had inducted him into their global warming “deniers club.” He takes it as an honor.  Take a look at Toles caricature.  Not a bad likeness!

Climate Hustle is obviously getting under the warming-Left’s skin.  They fear the facts like a vampire fears garlic.  Buy Climate Hustle on DVD or Blu-ray today and arm yourself with the facts.

For nature and people too,

Interested in what is genuinely going on and exposing deceptions in order to help others to awaken to what is hidden in plain sight. A bright light shone makes clear what does not belong. Please keep an open mind and do your own research. WebofEvidence on YouTube: https://www.youtube.com/channel/UCyTh2WC7w_8GYD6ZecXUQMQ Clare on Bitchute: https://www.bitchute.com/channel/1z2iaeXTln25/
View all posts by Clare Swinney →
This entry was posted in Global Warming Hoax. Bookmark the permalink.

1 Response to C Fact: Call off the “death spiral”