On Tuesday, the 18th of April this year in the sleepy little gold-rush town of Thames, which is at the southwestern end of the Coromandel Peninsula in New Zealand’s North Island, I was taking my mum out for a walk along the foreshore.  It was such a perfect day, until I noticed a long white stringy thread sail by in the air.

When we looked up, we saw that the mostly clear blue sky was full of fibers descending.  I estimated that some were around 10 meters or more in length, and they were landing everywhere, as well as hanging off power lines and trees.

The threads also had some foamy stuff in clumps attached, like a detergent foam, and a passer-by commented that people were seeing a lot of it up at the Pak’ n Save car park landing on the cars.

I was so shocked at the sight of it, I grabbed my camera after I got home and took some pictures of it, as well as picking up some samples on a stick, since I’d read about this happening elsewhere in the world and they always warned not to touch it if you find it, and some people had become sick after encountering it.  It maybe a coincidence, but I did feel ill the night after I touched it.  I had picked it off my clothes.
By the late afternoon, the amount of it hanging off some of the power lines was incredible, with some really long ones stretching between power poles and trees.
Somebody I spoke to reckoned it was cobwebs and a common occurrence, but there weren’t any spiders visible, and it seemed a bit thick for cobweb material…it was more like string, as the photos show.
Most of it was gone after it rained, but a few threads were still visible days later in the power lines and trees.
Didn’t see any mention of it in the local paper. 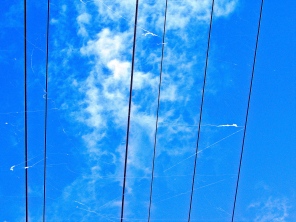 Interested in what is genuinely going on, not in the disinformation promoted as "truth" by the corrupt mainstream media. Please keep an open mind and do your own research. M.Sc. (Hons) from Auckland University. If you came to this site via the 'Silly Beliefs' disinformation website, please read my response to their article at the link: https://chemtrailsnorthnz.wordpress.com/2012/10/20/sillybeliefs-coms-lies-about-chemtrails-geo-engineering-exposed/
View all posts by Clare Swinney →
This entry was posted in Activism, Technology and tagged Thames. Bookmark the permalink.

10 Responses to Chem-webs In Thames