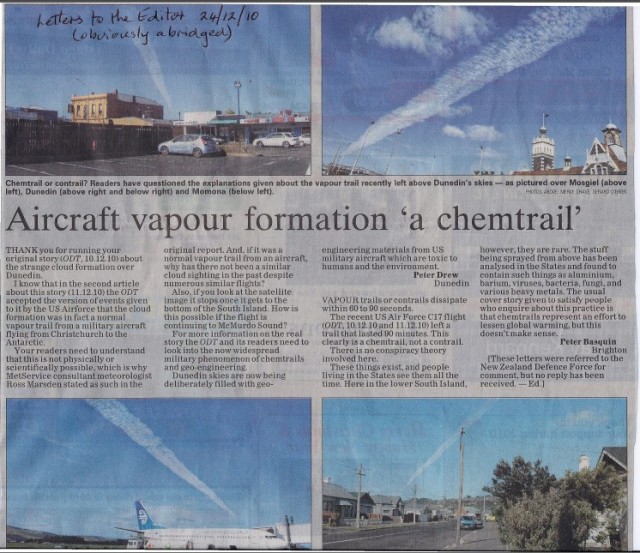 Click on the above to see larger version of the letters to the editor dated the 24th of December, 2010.

Thanks to Will Ryan of the Clear Skies Action Group for sending us the above clipping taken the Otago Daily Times, (ODT). This newspaper previously ran an article titled Clouded In Mystery on December 11th, 2010, in which the public was misled about the true nature of an aerosol that was photographed in Dunedin.

The ODT was incorrectly advised by MetService meteorologist Ross Marsden that it was a “vapour trail – or contrail – of a United States Air Force C17 flight from Christchurch to McMurdo Station in the Antarctic.”

While the title the ODT used with the letters in the December 24th, 2010 issue is misleading, as they are not vapour trails, a thumbs up to the paper for publishing the letters which draw the public’s attention to the true nature of the trails.

New Documentary: What In The World Are They Spraying?

Ross Marsden of MetService “Thrown To The Lions” At Wellington Screening Of What In The World Are They Spraying?

Committed to awakening those still asleep. Please keep an open mind and do your own research. WebofEvidence on YouTube: https://www.youtube.com/channel/UCyTh2WC7w_8GYD6ZecXUQMQ Clare on Bitchute: https://www.bitchute.com/channel/1z2iaeXTln25/
View all posts by Clare Swinney →
This entry was posted in Activism, Elsewhere in NZ. Bookmark the permalink.

2 Responses to Otago Daily Times Educates Its Readers About Chemtrails