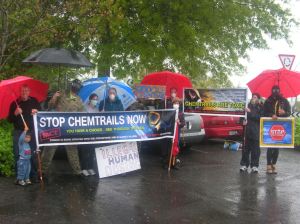 Thank-you very much to Tom MacRae.  He collected two rainwater samples in Hamilton, New Zealand in March and April, 2014 and sent them to Hill Laboratories for testing for the three elements being found globally in association with sightings of aerosol trails.  The full report from Hills may be viewed in pdf format here: 1266087-DWP-1.

Tom sent rainwater samples for testing, as he and his partner Mischele had serious concerns about the masses of aerosol material in the sky over their region.   As the results below show, aluminium, barium and strontium were present in the rain.

In addition, during recent droughts in New Zealand, long white aerosol trails, that linger and spread out were seen in the sky and in satellite imagery, suggesting that the aerosols, comprised of heavy metals, are being used for harmful weather modification purposes, a technology that’s far from new.  According to Fixing The Sky (2010) by historian Professor James Fleming, Mexico denounced the United States for having caused a protracted drought in the 1960s and in response to complaints, restrictions were put on where cloud seeding could take place.  Satellite imagery shows weather modification technology is being used worldwide now.

As mentioned before on this website, beware of websites such as Metabunk, which deceive the public into thinking all is normal.   It isn’t normal or OK for aluminium, barium and strontium to be present in the rainwater like this, just as it is not normal to find aerosol trails in the sky overhead week after week.  Also mentioned before on this website, we have found bright-white particles floating in the rainwater on a number of occasions, demonstrating that what we are finding is an industrial form of these chemicals, not a natural one.   And these findings are supported by those of the CarnicomInstitute’s and what whistleblower, Kristen Meghan, a former Air Force Bio-Environmental Engineer has revealed.   She said she witnessed the importation of canisters of powdered toxic metals including aluminum and barium onto U.S. Air Force bases.  Refer: Kristen Meghan, Info Wars Interview.

The difference between a contrail and chemtrails.

In regard to the pH of 6.2 that was found for both samples, this provides additional evidence of contamination and is a cause for concern. According to Environmental Chemistry at a Glance, (2006), by I. Pulford and H. Flowers, two professors of chemistry, the pH of unpolluted rainwater should be approximately 5.7, owing to the carbon dioxide in the atmosphere dissolved in it.  Below is the related quote from their book:

Master gardener and retired USDA Biologist, Frances Mangels of California has found the that pH of rainwater rises from about 5.5 to about 6.8 in association with a large volume of aerosol geoengineering activity.    The pH of rainwater in Whangarei, Northland on February 19th and 20th,  2014,  was found to be 6.7-6.8.   A pH of 6.2 found in Hamilton is not normal and may have a detrimental effect on plant growth, as Frances Mangels has indicated.

Please raise awareness of this issue in your community.  Provide friends and family with links to Look Up!, Why In The World Are They Spraying? and Aerosol Crimes.  (They are provided below for easy copying and pasting.) Suggest they use a water filter from now on and look up, get educated, get rainwater samples tested for the heavy metals used in aerosols and help to shine a light on the crimes of weather modification and the poisoning of our environment.  Once we reach a critical mass of awareness, the corrupt entities which keep these programs in operation will start to fall.

Link to Look Up!: http://www.disclose.tv/action/viewvideo/166125/LOOK_UP__New_Full_Documentary_Chemtrails_GeoEngineering__Weather_MOD_Must_Watch/

Link to Why in The World Are They Spraying?: https://www.youtube.com/watch?v=mEfJO0-cTis

There is an historical interest and experimentation documented regarding the use of barium in ionization and plasma physics.

Interested in what is genuinely going on, not in the disinformation promoted as "truth" by the corrupt mainstream media. Please keep an open mind and do your own research. M.Sc. (Hons) from Auckland University. If you came to this site via the 'Silly Beliefs' disinformation website, please read my response to their article at the link: https://chemtrailsnorthnz.wordpress.com/2012/10/20/sillybeliefs-coms-lies-about-chemtrails-geo-engineering-exposed/
View all posts by Clare Swinney →
This entry was posted in Aluminium, Barium, Clifford Carnicom, Poisoning Environment, Weather Modification. Bookmark the permalink.