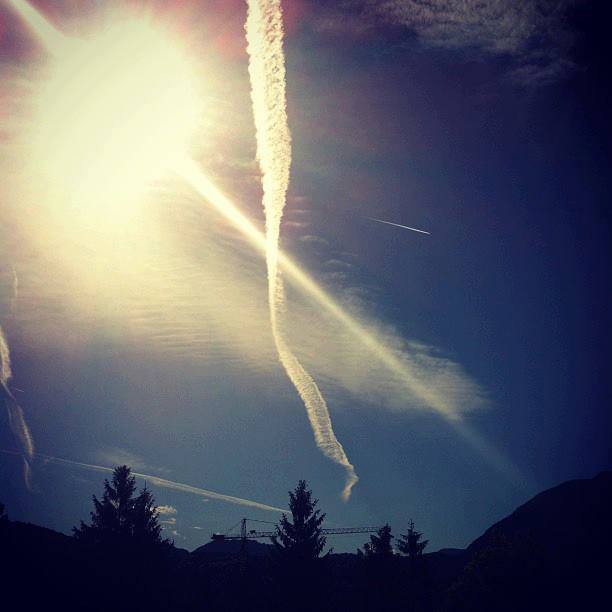 Photo from Facebook user showing the vast difference between chemtrails & a contrail or vapour trail. The contrail is just right of centre and tiny in comparison to the chemtrails.

Increasing numbers of New Zealanders are voicing their concerns about the aluminium, barium and strontium contaminating their environment in assocation with the issue commonly referred to as “chemtrails.”   While “chemtrails” have typically been portrayed by the mainstream media and politicians as nothing more than a hoax,  evidence shows the lingering plumes being discharged from aircraft are part of world wide programs and not merely water vapour, but normally comprised of cocktails of aerosolized heavy metals, amongst other environmental contaminants, which are being found in rainwater.

Massive aerosol operations, which evidence shows are primarily being used to modify the weather, are continuing around the world and appear to being stepped up, including in New Zealand.

Rainwater testing conducted in this country has confirmed the presence of elements associated with chemtrails and the following results reinforce the contention that our environment is being poisoned via an insidious and cumulative process.

The following results were provided by a Timaru-based activist who wishes to remain anonymous.   He is known to users of this website as the YouTuber South Canterbury Sky Watch and Brisbane Chemtrails.

He collected rainwater samples on April the 28th and May the 8th this year and had both of them tested for aluminium, barium and strontium by R J Hill Laboratories Ltd of Hamilton, a trusted lab which is accredited by International Accreditation New Zealand.  The samples were registered with the lab on the 13th of May and the results reported on the 19th of May and were as follows:

As was mentioned in a previous post on this website, the Guideline Value for aluminium in the Drinking Water Standards New Zealand 2005 (DWSNZ) (Revised 2008) is < 0.1 g/m³, which the rainwater sample for May the 8th exceeds by more than two-fold at 0.25 g/m³.  The Guideline Value relates to the water’s aesthetic quality -as it might not look attractive to drink if there is too much aluminium in it.  Although aluminium is known to be highly neurotoxic and linked to Alzheimer’s disease, there is no Maximum Acceptable Value referred to for aluminium in the DWSNZ, which some may wrongly assume means that high concentrations of aluminium are safe to drink, when a vast array of evidence shows otherwise.

According to Dr Russell L. Blaylock, MD, a retired neurosurgeon, the evidence of the tons of nanosized aluminium compounds being sprayed into the atmosphere is a major concern. He stated in ‘Chemtrails, Nanoaluminium & Neurodegenerative and Neurodevelopmental Effects: “Of special concern is the effect of these nanoparticles on the brain and spinal cord, as a growing list of neurodegenerative disaeases, including Alzheimer’s dementia, Parkinson’s disease and Lou Gehrig’s disease are strongly related to exposure to environmental aluminium.”  He spoke about aluminium toxicity and how to protect yourself in a recent podcast on March 13, 2014 on the Blaylock Health Channel.  Refer: http://www.blaylockhealthchannel.com/#!bhc-ep-6-aluminum-toxicity/c19fd.  As he points out, when combined with fluoride,  it becomes far more toxic, which is another reason to try and ensure drinking water is free of these pollutants.

Barium, an immune-system suppressant, is a soft metallic alkaline earth metal and should not be present in rainwater.   However, it is being found in New Zealand rainwater samples, so too strontium.  Lab results for New Zealand can be viewed on this website and all show barium and strontium in concentrations significantly lower than that of the aluminium concentration.

Barium is believed to being sprayed into the atmosphere from aircraft around the world, where it is being used for a variety of purposes.    A signficant clue regarding one of its uses lies in Bernard Eastlund’s patent for  HAARP,  which calls for large clouds of barium to be released into the atmosphere.  HAARP is a transmitter which can be used for a variety of functions, including heating the ionosphere and influencing rainfall patterns in a given area.

South Canterbury Sky Watch offers:  “Interesting times here in Timaru with so much talk in the newspapers about Timaru’s pollution levels, but of course, there is no mention of what is being sprayed above our heads.”

Look Up! – A Documentary

Interested in what is genuinely going on, not in the disinformation promoted as "truth" by the corrupt mainstream media. Please keep an open mind and do your own research. M.Sc. (Hons) from Auckland University. If you came to this site via the 'Silly Beliefs' disinformation website, please read my response to their article at the link: https://chemtrailsnorthnz.wordpress.com/2012/10/20/sillybeliefs-coms-lies-about-chemtrails-geo-engineering-exposed/
View all posts by Clare Swinney →
This entry was posted in Activism, Aluminium, Barium, Health Effects, Poisoning Environment, Weather Modification and tagged Timaru. Bookmark the permalink.